In a forest, there was a jackal named Chandaraka. One day he was very hungry and unable to find himself food he came nearby a town leaving the jungle behind. There, a group of mongrels saw him, finding him unfamiliar and strange they began chasing him and attacking him whenever it was possible for them. The jackal by the actions of mongrels was very much frightened. He was trying to save his life from those demons at every cost and in a panic state, he entered the house of a washerman. There he tried to hide in a vat full of blue which was used commonly for bleaching clothes. But when he came out, he became different, his body color was totally changed and he was painted in blue. So he became a blue animal totally distinct from all of the creatures of the forest who wasn’t ever saw before anywhere nor found. 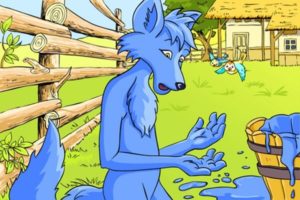 The jackal was jackal but wasn’t looking like one because of that blue paint all over him. So when he came back to the forest with his body completely dyed in blue, all of the animals including lions, tigers, panthers and other big animals in the forest scared of him and started running in all directions to save themselves from his wrath. They thought to themselves, “We have no idea about his powers and strength, who is he?  from where did he come from? what his intentions are? What harm can he do to us? He looks non-identical. It’s just better for us to keep a safe distance from him. And even our elders have warned us to not trust him whose conduct, caste and courage are not known.”

The jackal was closely noticing the expressions and concluded that all the animals were frightened because he had a new skin color that was not common. He knew every creature was scared, taking the opportunity he tried to fool them by saying, “Why do you run away from me like that. I assure you, there is no need to fear from me. You don’t know me but I am a special creation of God. He before sending me here told me that the animals in this jungle had no ruler and he nominated me to be your king, so from today onwards I will be the kIng of this forest and rule over you all. He named me as Kakudruma and also instructed me to rule better. This way, you all can live safely under the umbrella of my protection.” He finished.

All the animals in the jungle accepted him as the king. It was his decision to distribute several important designations to other animals to be around him fo king’s service. He appointed lion as his minster, the tiger as his chamberlain and the wolf as the gatekeeper. this way he distributed office to the animals. And one thing more the new king Kakudruma also banished all the jackals in the forest. The tigers, lions, and the wolves used to kill other animals to bring that animal as food for him. Blue Dyed King after taking his share of food would distribute the rest of the killed animals among his subjects.

The blue jackal settled himself well in the atmosphere and was ruling over the forest. It was like any other day when he was holding court, but something happened that shouldn’t have happened according to that dyed jackal for his welfare. He heard a gang of jackals howling. Thrilled by the sound of his own ilk he failed to keep his excitement and started loudly responding in his natural voice which was known by all. The lions and other animals immediately recognized that their king was after all a jackal nothing precious or dangerous or different or a unique creature. He wasn’t a Godsend they realized. They at once pounced on the dyed jackal and killed him. Jackal’s Stupidity caused him to lose his life.

Damanaka explained to his king what this story was trying to hint him “The moral is,” Damanaka said, “he who abandons his own folk will perish.”

Pinglakaa was still not convinced with Damanaka’s story-telling and for that, he questioned “But how do I believe that Sanjeevaka has evil intentions?,” to Damanaka.

Damanaka understood that King is still believing Sanjeevaka to be no harmful, he was still in his good books and purely innocent, wasn’t his enemy in any way. So after thinking quickly he answered “Sanjeevaka himself told me today that he would kill you tomorrow. I request you to notice him carefully and closely tomorrow keeping your eyes on him, you will find him red-eyed and occupying a seat he does not even deserve there. I confirm he would stare at you angrily. and my lord, If what I say comes true, it will depend on you entirely what to do with Sanjeevaka,” said Damanaka.

Damanaka after meeting with the lion king went to Sanjeevaka the bullock. The bullock received him with courtesy and said, “My friend, we are meeting after a long time I guess. What made you come here? What can I do for you? Tell me. You know they are blessed who are visited by their friends.”

Damanaka replied to the generous question of Sanjeevaka, “You are absolutely right, sir. But what can I say as you know there is no rest for servants. They have lost their freedom for the sake of earning money. They are deprived of good sleep, they have no interest in food nor do they get to taste delicious food nor they can speak anytime anywhere without fear. Yet they live. Somebody has rightly compared service to a dog’s life, I agree with this comparison.”

“Come to the point, my friend” The bullock was now impatient and he got the hint in Damanaka’s voice that there was something he was hiding from him and it made him concerned for what reason or what actually made Damanaka actually come here.

Damanaka started with his tactics by saying, “Sir, a minister’s job is exactly not supposed to give bad advice. And he is bound to state and for the sake of loyalty to his job, he cannot also disclose state secrets. And in any case, If he does, he will go to hell after his death. But here the matter is different you are my friend also and for the cause of our friendship, I have to reveal a secret to you. It was on my suggestion that you have taken up service in the royal household. You are unaware of the fact that the King, Pingalaka has some evil designs against you. When we were alone at his place, he revealed his plans to me that he would kill you and bring happiness and prosperity to everyone in the palace.

I tried my best to change this evil intention he made for you, I told him, “this will be like stabbing a friend in the back”. But the king was very angry and he gave me the reason why he wanted to kill you he said, “You are a vegetarian and he lived on a diet of meat and so there was natural discord between you and him. He said that this was enough reason to not spare your life. This was the secret I have kept to myself for a long time and it felt like a burden on me from that moment because you are my dear. It is now for you to do what is necessary and what you can do to save yourself,”

Sanjeevaka wasn’t expecting any of this and was shocked, he fainted on hearing these words. Recovering after some time, he said, “It is truly said that a person who serves the king is like a bullock without even horns. It is extremely difficult to read the mind of a king like Pingalaka who has different ideas going on up there in his head. I understand it is not easy to serve a king. Even sages couldn’t really read the mind of kings, it’s that tough. I think there are some servants out there who are very jealous of my growing friendship with the king, they must have poisoned his mind.”

“Don’t worry,” Damanaka said trying to relax Sanjeevaka who felt disappointed with King. “I advice you to just forget what tales the servants carried to the king. You are still in the position in which you can win his favor by your sweet words.”

Sanjeevaka wasn’t hopeful with this idea so replied, “I think That’s not true. It is impossible to live with wicked people, no matter how small or tiny they are. They can always think of a hundred ways to get you, in the same manner, the jackal and crow trapped the camel.”

“This story sounds interesting to me. Better to let me know what happened to the camel, will you?,” asked Damanaka.

After Damanka’s request, Sanjeevaka began to tell him the story.