Once upon a time, there was a city named Vardhaman and there lived a wealthy merchant whose name was Dantila. He organized a very grand reception for his wedding where he invited no. of high-class people. His wedding was attended by the king, the queen, their ministers and all the rich and influential persons in the city, all were present and enjoying his great wedding reception. But also a Sweeper called Gorambha was there, he was a loyal sweeper in the royal household. When Dantila noticed him occupying a seat which was reserved only for nobles of the king, he got very angry and frustrated with his act of sitting on a reserved seat which wasn’t for him and also he ordered his servants to immediately throw him out of his house.

Gorambha felt very insulted and was displeased with the merchant. He thought to himself “I am a poor man so I am not in the position to give a fitting reply to such a wealthy person as Dantila for his humiliating behavior towards me. But I must somehow have to see that the king stops his favors towards him.” Then he hit upon a plan to take revenge on Dantila.

One day, early morning when the king was in his sleep, Gorambha went to his room and started pretending to sweep the king’s bedroom and began loudly murmuring, “Oh, how arrogant is this Dantila! He has the nerve to lock the queen in his embrace”. Hearing such type of sentence, the King immediately woke up with anger and started demanding to know whether whatever Gorambha was saying in his murmur a few seconds ago is all true or not? Did Dantila really dare to embrace his Queen?

When King asked Gorambha if whatever he said is real then Gorambha replied: “Oh your majesty, I don’t remember nor do I know whatever I murmured because I was a little drowsy as I spent the whole night yesterday in gambling”. 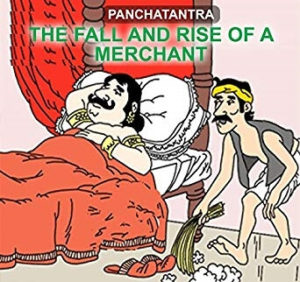 The king wasn’t satisfied with whatever servant feed him with. The king thought about it and he concluded that the sweeper might have seen Dantila because he had equal access to the royal household as Gorambha, embracing the queen. He further remembered that the wise always that the men were likely to talk in their sleep about what they did, or saw or desired anything in the day. Women were chaste because men were not within reach or they were afraid of prying servants. The king was convinced with his self-discovery and he believed that Dantila must have embraced the queen, then after this conclusion King strictly barred Dantila’s access to the royal household from that day.

The merchant started grieving his fate though he had not done any harm to the king or any of his relatives even in his dreams to deserve to be banned from the king’s royal household completely.  One day, Dantila was trying to enter the king’s palace but he was barred by the king’s men. Gorambha was there and he was seeing everything from not so far, seeing merchant wasn’t getting allowed to enter in the palace he told guards “You fools, you are barring the great Dantila who has won king’s favor and is in the good terms with the king. He is extremely powerful. I should warn you, if you stop him, you will meet with the same fate as I did at the hands of Dantila one day.”

The merchant was listening to Gorambha intently and understood all of the things happening with him related to disturbing relations with King and debarred entry from the King’s palace. The merchant thought that it would be very good if he makes Gorambha happy and wins his confidence. He decided to make Gorambha forgive him for his wrong behavior at the wedding reception of his. And he invited the sweeper for tea one day and presented him with expensive and quality clothes, further he told him asking for his forgiveness “Friend, It was never my intention in the first pace to insult you like that. It’s just you occupied as the seat I had set apart for the learned. I kindly ask you to forgive me for humiliating you that day”

The sweeper was pleased with Dantila’s treatment and he forgave him instantly. The sweeper promised Dantila that he would win the King’s favor for him once again. The next day, Gorambha repeated the same act of pretending to be sweeping King’s room and murmuring irrelevantly, raving that our king gets this hungry that he eats cucumber in the restroom. Listening to such sentence king immediately got up from his sleep and getting angry he said “What nonsense are you talking man? Did you ever see me doing such things?” he demanded to know. But Gorambha’s reply was as same as he gave the last time “No, your majesty. I do not know nor do I remember what I was saying because I was drowsy having spent the entire night in gambling,” the sweeper said.

The king then realized that if what the sweeper had said about him was not true at all then what he had said about Dantila also couldn’t be true. A great merchant and a person like Dantila could not have done what Gorambha had told him. The king also found that without Dantila the affairs of the state had suffered a lot and civic administration had come to a standstill. The king immediately realizing his mistake summoned the merchant to his palace and also restored to him all the authority he had enjoyed before he fell out of the king’s favor.

Damanaka resumed “That is why we must know that pride goes before fall.” Sanjeeveka agreed. Then after Damanaka took him to the lion king, Damanaka introduced Sanjeevaka to Pingalaka. After exchanging pleasantries, the king asked him about his past and the purpose behind staying in the jungle these days. Bullock told Pingalaka whole story of how he got here and what was his past life, where he lived before here etc. The king said, “Friend, don’t be afraid from now on as I assure you that I will protect you from all the wild animals here because even stronger animals feel insecure here”.

Since after then, The King asked Karataka and Damanaka to look after the affairs of the state, gave them enough authority and started spending his time merrily in the company of Sanjeevaka the bullock. But the jackals who became ministers again were worried that since after Sanjeevaka had become a good friend of the king, the king has given up his royal sports and pastime and ended up being a saint.

Karataka and Damanaka thought, “King is becoming different now as he has stopped us taking into confidence after the arrival of Sanjeevaka in his life and he became his best friend. He is also indifferent to his kingly duties. What shall we do now”? They were both tensed about the whole situation.

Karataka said, “The King may not mind our advice, But it is the duty of ours to advise him on it if is really for his good. Elders have held that even if the king is not interested in taking or paying attention to good advice, his ministers must offer him advice no matter what. “You are right,” said Damanaka. “The mistake is mine. Whatever happened to the sage and the jackal should not happen to us.”

Kartaka became excited and pleaded Damanaka to tell him the story of the sage and jackal to which Damanaka began telling him.