There was a forest far far away from the city, there a lion lived whose name was Madotaka served by a leopard, a jackal and a crow. One day they were going somewhere and their eyes fell on Kradanka, a camel who by mistake lost his way. They noticed that the animal isn’t ordinary and was an unusual one, they informed about it to their king as soon as possible. Lion told them to search for his identity whether he is a wild or a domestic animal.

The crow informed the king that the camel was a domestic one and he fits to be killed and eaten by his king. But the offer was refused by the king and he described why he did that:

“I shouldn’t be killing who came here seeking hospitality. As our elders have always said, you cannot kill even an enemy who came trusting you. He who does that and kills beyond such advice commits the sins of killing a hundred Brahmins. I order you to assure him of safety and bring him right here to me.”

The three assistants did what they were ordered and brought the camel safe and sound to the presence of the Lion. Lion asked the camel to relate his story, Kradanaka the camel told him how he was part of a trade caravan and how he had lost his way during his journey. Upon hearing his story, the lion told the camel, “Kradanaka, why do you go back to the village once again and become a beast of burden and to be treated like trash again? You can stay here with us without any hesitation and just feast on this tender grasses.” Thereafter without any difficult and much far from human civilization the camel stayed there happily with the lion and his three assistants.

One day, the lion was locked in a battle with an elephant. The tusker gored Madotkata and badly injured him. The lion became too weak to hunt for himself. Without food, he wasn’t in any position to do anything. Then, the lion asked the assistants to go out and look for some animal so that he can have his meal as the king himself wasn’t in the position to hunt. “Assistants, you all are required to just bring any animal as my meal for today and if if you fail to kill, I will somehow kill that animal and provide food for you all,” said the lion.

The leopard, the jackal, and the camel went to look for an animal everywhere but failed to find even one. The jackal told the crow aside:

“Friend, I don’t understand why are we wasting our time like this? We have Kradanaka, our lord’s loyal friend. He is a vegetarian even. Let’s just kill him, serve to the king and survive all of us. “To which crow replied, “That is fine you know. But we cannot kill him this easily as he has our lord’s assurance of protection”.

The jackal didn’t agree with crow’s refusal and said, “Leave it to me. I shall convince Madotaka to kill the camel. You just wait here. I will meet the lord instantly and get his permission”, saying this the jackal hurried to meet the lion.

The jackal reached there in no time and told his lord, “Oh, our Lord, we went to every nook and corner of this vast forest. Forgive me to inform you, but we could not find even a single animal. There wasn’t a single creature roaming around. We are tired, feeling weak and hungry also. Since my lord is also in the same condition as us, I humbly want to request and suggest that we make a meal of this camel we have found a few days back.”

The king was hungry and weak but listening to those words out of the jackals’ mouth he became highly annoyed and frustrated too. The lion said, “You sinner if you repeat these words again, I shall kill you first. Do you understand? I have given him my word of mouth. How can I kill him? Don’t you remember our elders always said that no gift of land or cow or food is greater than the gift of an assurance”? lion asked jackal.

“You are right my lord. I know very well that it is a sin to kill him who has your word. But please think about it if the camel voluntarily comes forward and offers himself to us as food then it will be no sin to accept the offer. And if the camel does not volunteer, then you have every right to kill anyone of us. Do not forget our lord that You are hungry and in the state of close to your end. In this difficult situation, If we, your assistants do not make use of ourselves to you at this time what value have our lives? I can’t even think of something happening to you and if by any chance today anything undesirable happens to our lord, we will immolate ourselves anyways.”

The jackal summoned up rest of lion’s assistants and detailed them about lion’s condition by saying this, “Friends, our lord is in a pitiable condition. As of my knowledge, there is now no one to protect us from this jungle beasts. It is not wise enough to roam for the search of food here and there aimlessly, let us offer our bodies to him. This generous act of ours will also deliver us from the burden of debt. The servant who is witness to the helpless death of his master will surely go to hell without any doubt.”

After the jackal’s plea, all of them called on the lion with tears in their eyes. “What’s the matter? Did you find an animal?” asked the hungry lion.

“No, my lord. We went everywhere, searched every place, every inch of the forest, we tried hard and hard. But We are not lucky. In the end, We found no animal to feed you. But I have a request to make you, I insist my lord to you to have me for your meal. That will mean two birds with one shot. This way our lord will survive and I will be blessed to go to heaven. He who lays down his life to save his lord will have no rebirth and ultimate relief from this life and death circle on earth,” said the crow. 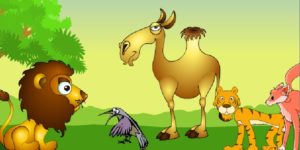 Crow proved his loyalty by offering himself to be eaten by his lord and now it was the turn of the jackal to show his loyalty to Lion. Now he started, “My friend, crow. We all know that your body is too small for our big lord to slake the hunger of his. It will add nothing much but amounts to starving him more and that will be a sin. Get out of my way. Here, I have to submit a plea to my lord. I will make a full meal for him. Let me submit myself to him.”

Addressing the lion, the jackal requested, “Lord, I am a good option here to be submitted for good, I request you to have me for your meal and please ensure me a place in heaven. Nothing to mention but the lord has rights of life and death over his servants. Therefore, I see no problem and no sin in exercising this right when its time of need.”

The leopard saw all of this he also intervened and said, “You jackal, you are no great personality, my friend. It is my place to be submitted to him so let me plead with the lord for this.” Addressing Madotkata, the leopard started pleading like others, “Oh lord, let me give away my life to save your life. Please permit me to earn a permanent berth in heaven. This sacrifice made by me will win fame for me on earth please have mercy on me and take my life.”

Kradanaka was right there and he was seeing and he concluded that everyone made a request to the king, All this set made him thinking, “All these servants here of the lord have said what they wanted to say. Still, the lion did not make the decision to kill anyone of them. So, why would he kill me too? Let me also offer to be the lord’s food today like all of them. I am sure my friends will support me in this and they will not let me die.’ He then turned to the leopard and started with his turn and said, “I see my friend, What you have said is right and proper. But don’t forget that you are a carnivorous animal and also you belong to the same species as the master does. Knowing this how can he kill you? I request you to Let me offer myself to make his food to be served tonight.”

The camel didn’t wait for a minute after his speech and he just came forward and began requesting the lion to have him for that day’s meal. Listening camel plead and his own agreement to be killed, At once they all the jackal and the leopard pounced on him and tore him to pieces and all of them started having their sumptuous feast.

And with this, the story ended, As the story ended Sanjeevaka told Damanaka, “They are Wicked people who are surrounded near the king. Good men should not serve such masters. I will need your advice to get out of this problem.” He pleaded to Damanka to suggest a way through which he can save his life from all this misery.

“I suggest the best course for you is to leave the country at this moment if you wish to live long and healthy,” said Damanaka suggesting Sanjeevaka.

“I don’t think it would be a wise decision to take leave from here when the king is still angry. He is king, powerful and intelligent, he can easily reach to me anywhere I go. The only best and the only alternative I have is to go to war with the king.”

Now Damanaka after hearing the determined decision of Sanjeevaka was afraid that if he chose to fight Pingalaka the lion might die and that would be not good at all, in fact, that would be a disaster. He thought he should try harder to persuade the bullock to take his leave from the forest as soon as possible, he thought.

“Going to war is all right. But how can there be a war between a servant and a king? If you underestimate the strength of your enemy you will meet the same fate as the Sea met at the hands of the bird pair.” Damanaka tried to relate his condition with some old story and make him realize that it won’t be good if the servant and king foght like this.

This made him Curious, So Sanjeevaka asked, “What happened to the birds?”

The Bird Pair And The Sea

The Bird Pair And The Sea