The First World Cup Win for India – It was Simply Miracle

The first time of anything is special, no matter how small or big the occasion is… it is always special. The first 100 in the exam is special, the first salary, the first date. These moments always have a special place in our hearts. But that 1983 World Cup win was something else, something different. Of course, it was India’s first but it’s not the only reason why it was so special, but the effect it had on the mindset of the upcoming generation, it made youngsters believe that one day they can lift the cup too, it completely changed the belives of players. After that win, they started believing that one day they can lift that cup too. Youngsters like Sachin and Sourav and Kumble all have mentioned the impact it had on them and these are the cricketers who inspired the next generation. so one of the biggest reasons why India is so successful today is that the world cup win. 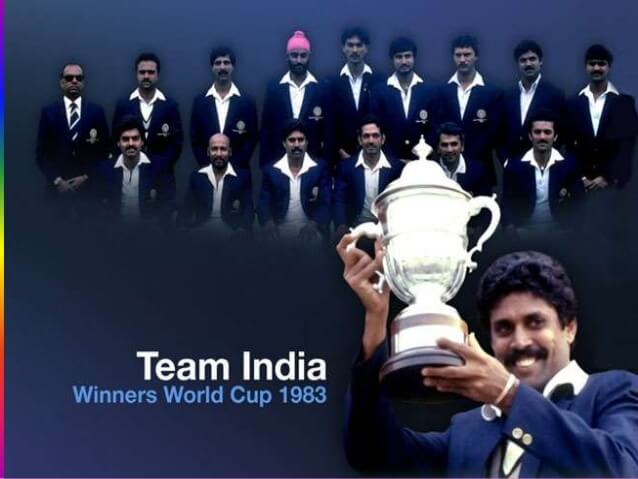 India’s victory in the 1983 Cricket World Cup laid a stage for India to emerge in the world cricket after they defeated two-time world champions West Indies, In the final of the 1983 Cricket World Cup, which team was led by Kapil Dev. Played at the iconic Lord’s in England, the 1983 World Cup win will soon be made into a film ’83, directed by Kabir Khan, with Ranveer Singh as Indian cricket team captain Kapil Dev. So let’s take a look at India’s miraculous 1983 world cup campaign.

The Mindset before the start

India never belived that they were going to achieve anything in the tournament. Most Indian cricketers arrived in England thinking of the World Cup as a mere stopover as they had not imagined progressing beyond the league stage. Anticipating an early exit, they had planned a vacation to the US where they would play a bunch of friendly matches. Recently married opener Krishnamachari Srikkanth had even planned his honeymoon! All the plans had to be cancelled in the wake of the results the players came up with on the field. Srikkanth had to cancel his tickets too and later joked that Kapil owed him money for the cancellation.

India were  never comfortable with the ‘underdogs’  and they proved the world that thery weren’t underdogs by beating hot favourites West indies in the very first match. Yashpal Sharma hit 89 while Roger Binny and Ravi Shastri picked up 3 wickets each to plot Windies’ downfall but the players knew that they had to come up with more such performances in order to win the tournament.

Blast from English media: English media is never known for holding back, they come all guns blazing at opposition and same happened this time. Even before the start of the tournament, a very famous media published that India wouldn’t even make it to the end of league stage and would be kicked out before the knockouts. 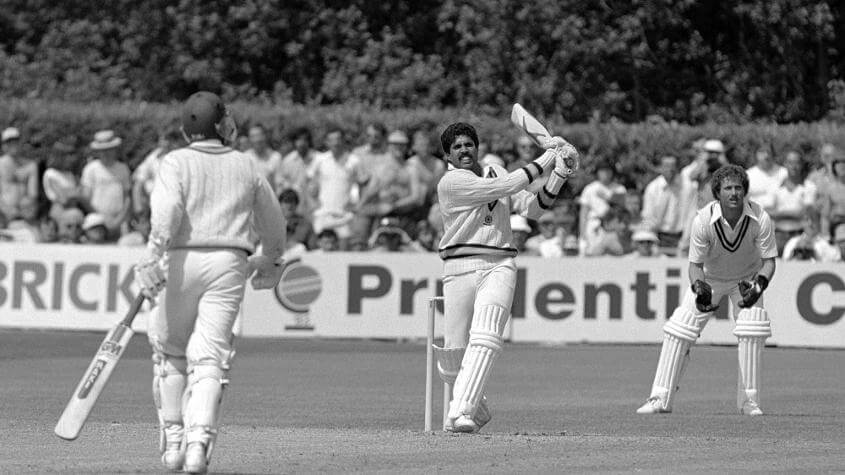 India’s worst fears came to life when they faced minnows Zimbabwe for the 2nd time, having beaten them comfortably in the earlier encounter. At 17/5 and then 78/7, India were staring at an embarrassing loss but their skipper had other ideas. Playing arguably the best counter-attacking ODI innings ever, Kapil Dev hit 16 fours and 6 sixes during his breathtaking 175* as he smashed all the bowlers all around the park. India’s final score was 266 which proved more than enough for their bowlers to dismiss Zimbabwe for 235.Unluckily for Indian fans, the match wasn’t televised, leaving no chance for them to relive one of the greatest one-day innings.That innings changed the whole mindset of the team and a match that could’ve mentally thrown India out of the tournament turnedout to be the match that boosted team’s confident to a whole different level.

The West Indies opening pair Gordon Greenidge and Desmond Haynes was known to be the best in the world. India didn’t have much on the board so it ws necessary to dismiss the duo before they cause any damaage because everyone knew that if they survive the opening spell then it’s West Indies’ match. However, thankfully Balvinder sindhu bowled a outswinging delivery to dismiss Gordon Greenidge at just 5 runs to give India an early start.

The Miracelous catch by kapil dev 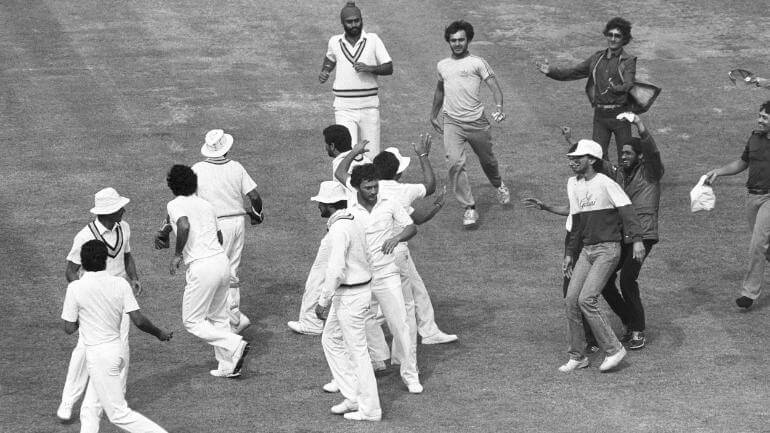 In the final Windies were chasing and the target wasn’t too big and on top of that Sir Viv Richards was in the middle standing like a wall. The score was 57/2 and Richands was batting at 33 and then he mistimed a ball in the air and kapil ran backwards and completed and unbeliable catch to dismiss the all time great. That catch gave India an edge over windies and in that moment the whole nation belived that maybe this is our year and they were proved right because India eventually won the match and lifted the cup. 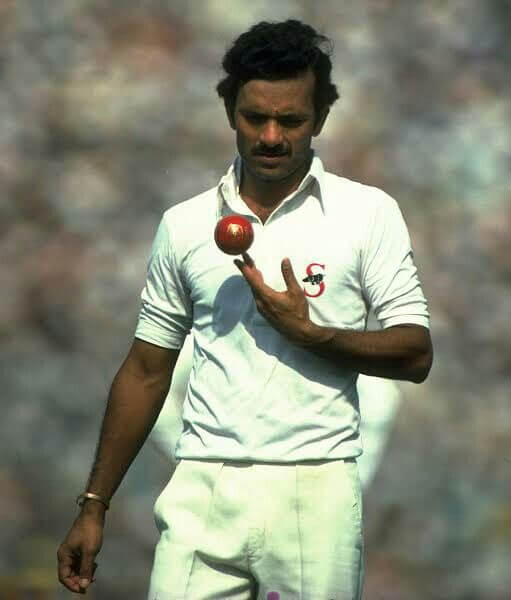 When India met West Indies for the final at Lord’s, Clive Lloyd won the toss and decided to bowl first. And his decision was proved right after India were bundled out for a mere 183 runs, the team was obviously disappointed. In reply, West Indian great Vivian Richards was smashing the Indian bowlers and it seemed like an one-sided encounter. Then Madan Lal approached Kapil and said ‘You give me the ball’. I have earlier dismissed Richards, I can do it once again. Seeing that the other bowlers were going for runs, Kapil had no choice but to accept the request. The rest, as they say, is history. Madan Lal duly picked up the wicket of Sir Viv to all but seal West Indies’ hopes as India celebrated a stupendous victory.

Lata comes to the resque 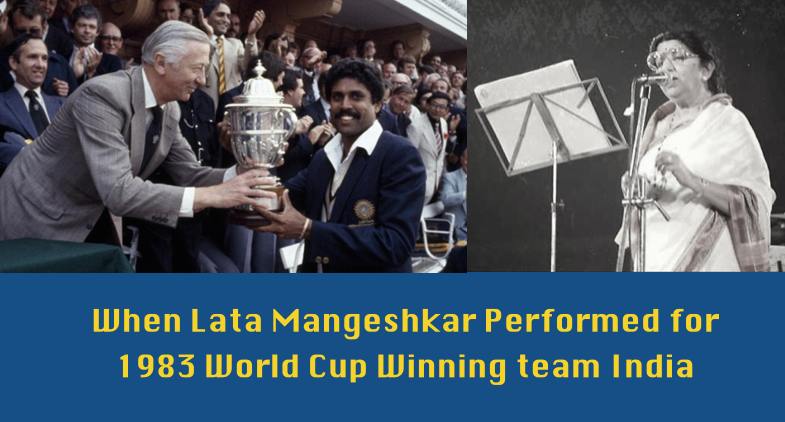 After the victorious Indian team arrived home, the Board of Control for Cricket in India (BCCI) wanted to reward the players. The problem was that, unlike now, in 1983 the BCCI didn’t have the resourses to do that. The then BCCI president NKP Salve approached popular singer Lata Mangeshkar for help. They decided to arrange a concert in delhi with a sole purpose of raising money for rewarding the team and thanks to lata’s populatirity, it was full show. A total of Rs 20,00,000 was raised through the same.